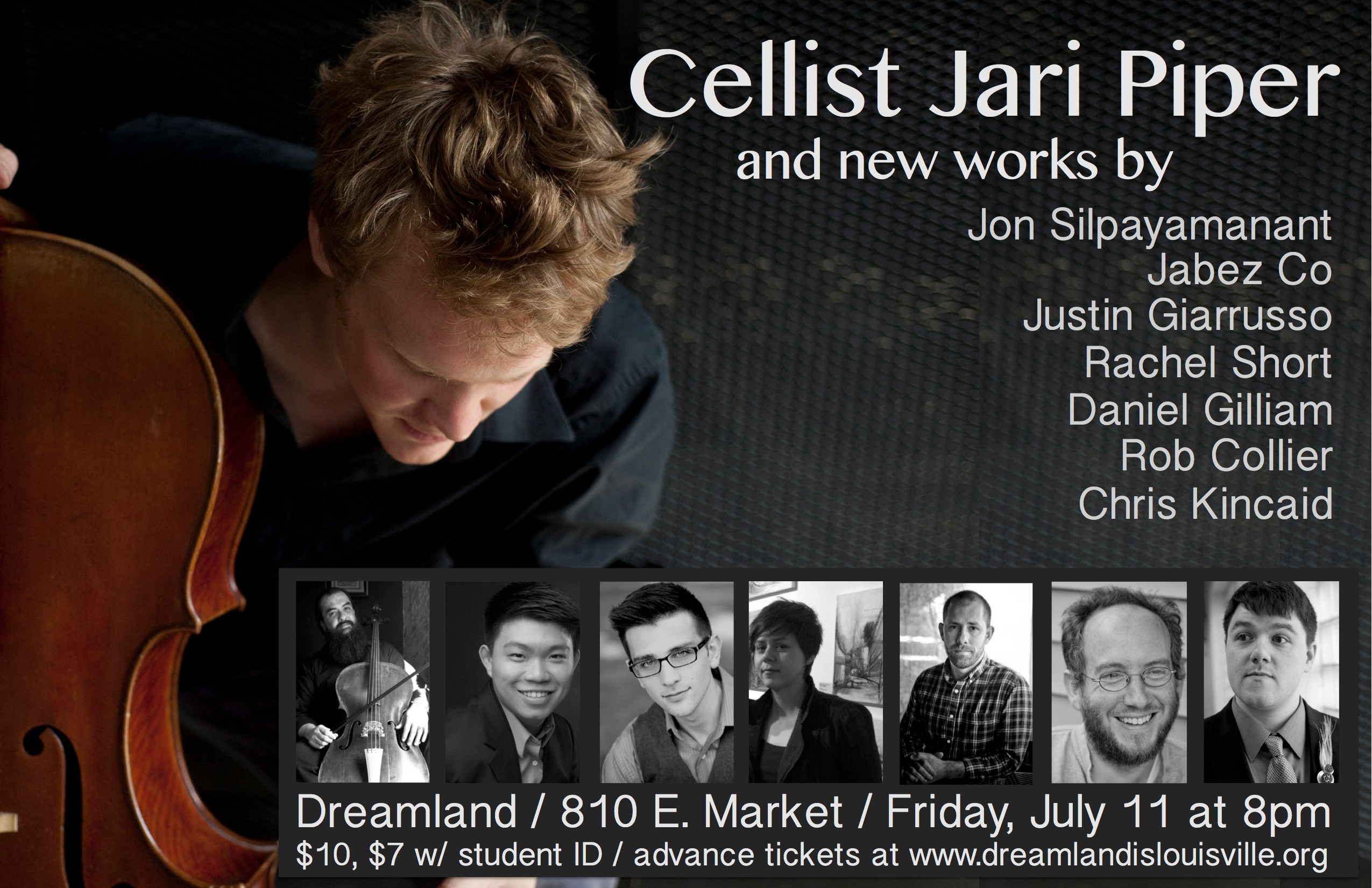 My piece, California Zephyr (for solo cello) will be performed by Jari Piper at Dreamland (performance and visual art space) on Friday, July 11 at 8pm. The venue is at 810 E. Market in Louisville, KY (behind Decca restaurant.)  Along with my piece, six other wonderful composers will be presenting new works for a variety of ensembles.

Jari Piper Bio
JARI PIPER is as comfortable performing in the concert hall as well as bars, cafes, or just the metro. Named the 2013 Young Alaskan Artist of the Year, Jari is currently on his second solo tour of America, playing contemporary works for cello in a wide variety of venues and collaborating with different artists along the way. Jari just released his first CD, “New Work for Solo Cello,” consisting of contemporary music by both emerging and renowned composers, on which are the premiere recordings of three new compositions. Classically trained, Jari is part of the new wave of young musicians who are showing the world that art music belongs both in and outside the concert hall, performing New Music that will bend your ears in ways that you did not think possible (and you’ll like it). His music takes inspiration from a global range of genres and influences: Classical, Jazz, Minimalism, and folk music from the Balkans and the Americas all feature within his programs. A firm believer in the importance of New Music, Jari has premiered numerous compositions, and strives to make modern music more universally accessible to the public through performance. Although the bulk of his programs consist of 20th and 21st century music, Jari still loves the opportunity to perform Baroque, Classical, and Romantic music as well.

Jari has performed across the United States, Alaska, Canada, and Greece. He made his solo debut in 2011, performing Haydn’s “Cello Concerto No. 1” with the University of Manitoba Symphony Orchestra. His current professional associations include the ME|2 String Orchestra in Vermont, the McGill Symphony Orchestra, and as a regular performer in Canada and America. He has broadened his education through a number of master classes with noted pedagogues and performers such as Colin Carr, Hans Jensen, Matt Haimovitz, and David Harrington. He holds a Masters in Music Performance from McGill University and a B. Mus from the University of Manitoba. Jari counts Dr. Minna Rose Chung, Yegor Dyachkov, and Linda Ottum as his principal teachers. You can find out more and have a listen to him at his website, http://www.jaripiper.com/. 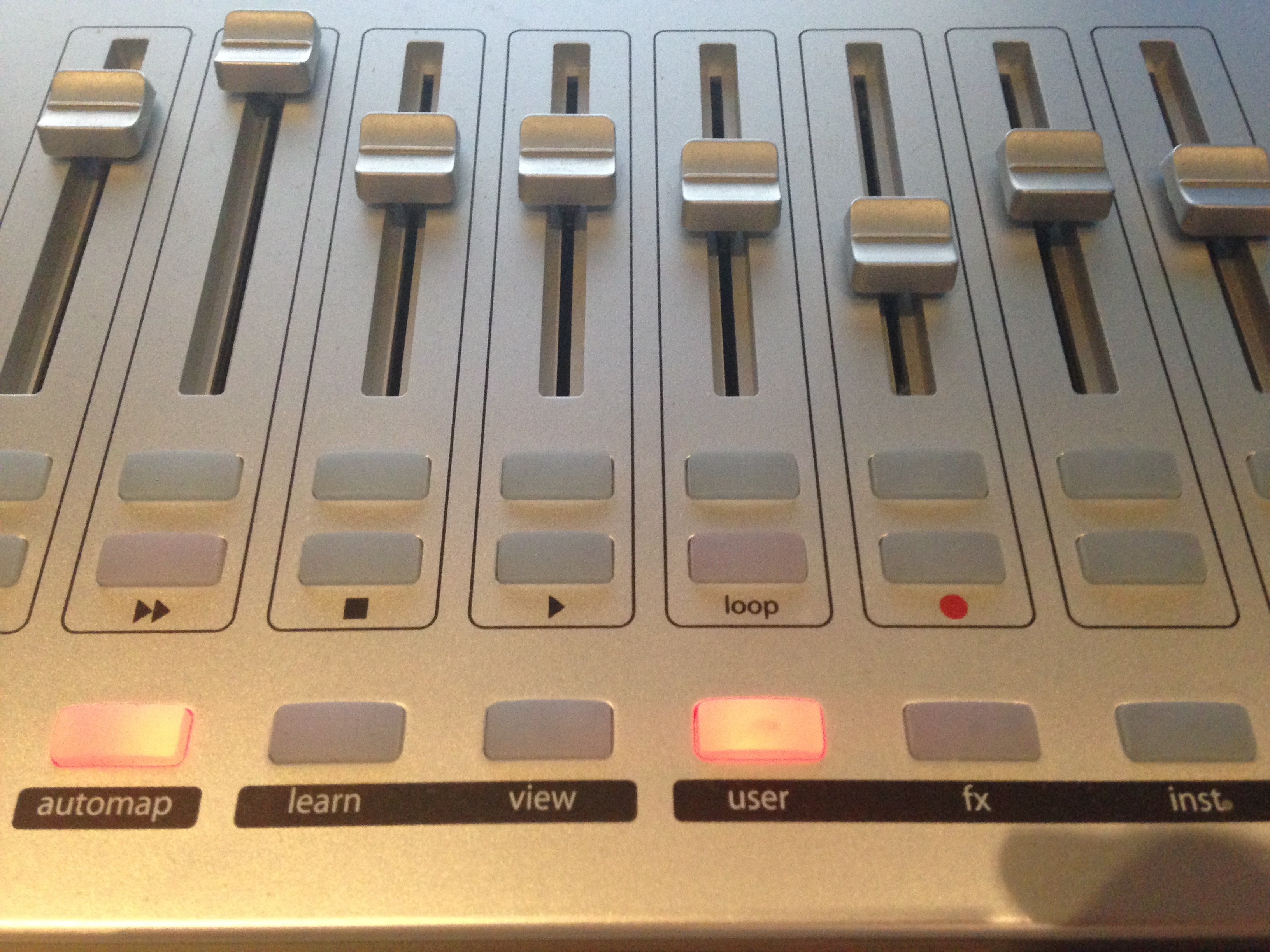 So I’m really honing my mixing chops this month! I have been working on the new full-length album by Twenty First Century Fox, new EP by For The Birds, new tracks by Versityle, live concert recordings of the Chamber Winds Louisville, virtual training videos for a large health insurance provider, and TWO releases by my band, Karass! One is our upcoming full length album and the other is a tape release collaboration with five friend-vocalists! I can’t wait for these tracks to be released! They’ve been so much fun to record and mix!