This weekend at the Doris Ullmann gallery on the Campus of Berea College a collaborative exhibit opened between myself and Louisville’s historical fiber arts nonprofit organization, the Little Loomhouse. The exhibit titled The Kentucky Coverlet Connection: Lou Tate, the Little Loomhouse, and Berea displayed the world-class collection of woven Kentucky coverlets, weaving draft patterns, and historical artifacts that tell the story of this folk art tradition and Lou Tate’s legacy as a weaver and historian, including her time as a student at Berea College. My contribution was an installation of my newest work,”Overshot”, six movements for strings and electronics, influenced by typical Kentucky folk weaving patterns.

Listen to it here: Overshot (for strings and Electronics)

Overshot
for strings and electronics

The music you are hearing is inspired by historic Kentucky coverlets, the weaving technique known as “overshot,” and several popular patterns of weaving drafts, which Lou Tate often remarked resembled a musical staff. The woven coverlet, a staple of Appalachian folk art, was usually created in the home and has a strong identity with patterns that emerged and evolved over time, through the sharing of drafts between generations of weavers eager to create something new.

Overshot utilizes the instruments found in a string quartet, especially the cello, as well as electronics to create six movements inspired by various aspects of this rich textile art.  Each movement focuses on a different aspect of weaving, such as: literal translations of draft patterns; ideas elicited in the names of popular drafts; the nature of weaving’s oral pedagogy; aural approximations of the visual contour in finished patterns; and the meditative and rhythmic action in the physical act of weaving. The musical form of Overshot is a nod to one of Beethoven’s last string quartets, op. 130, No. 13 in Bb major.

I. Whig Rose – Adagio, ma non troppo (Slow, but not too slow) 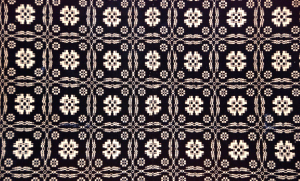 This movement translates an overshot pattern into musical notation in a very literal sense. The markings on the draft correspond to a space in between the bar lines of the music. The interest comes from interpreting this same pattern for several different instrument clefs at different rates of speed, creating an algorithmic lattice from the simple four note pattern.

This movement elicits the idea of unwieldy motion, speeding forward. Like a chariot wheel spinning furiously, the descending theme rushes toward the end.

Although there have been many great books published on weaving, there has always been and continues to be a strong tradition of learning to weave through oral communication. In this movement, the voices of instructors from videos found on Youtube are transcribed and juxtaposed against each other in the voices of four cellos. The cacophony feels similar to my own experiences I had when I first started to learn about weaving. The variety of terminology and approaches of many Youtube instructors was interesting while simultaneously perplexing. After a while it begins to make sense.

This movement focuses on a singular sound expanding and contracting, mimicking the visual contour of a pine tree design. The motion in this movement related to the tempo markings is not present throughout, but instead found in the moments of expansion.

Watching a person that is weaving can be a meditative experience. Soon you begin to hear a rhythm that feels very natural.  In this movement, the recorded sounds of a working loom are captured.  They bring with them a calm similar to the quiet period after a snow fall.

A fugue is a technique for several voices where a theme is presented in a variety of ways. It can also describe a form of mental state that includes confusion and hysteria. This final movement of Overshot uses ideas from all of the previous movements and juxtaposes them against each other, creating a chaotic state. The appearance of the double bowknot distorts the viewer’s perception of depth.  The shapes give the illusion of bulging in the coverlet. The result is hypnotic.

4 Replies to “Overshot (for strings and electronics): The Kentucky Coverlet Connection Exhibit”